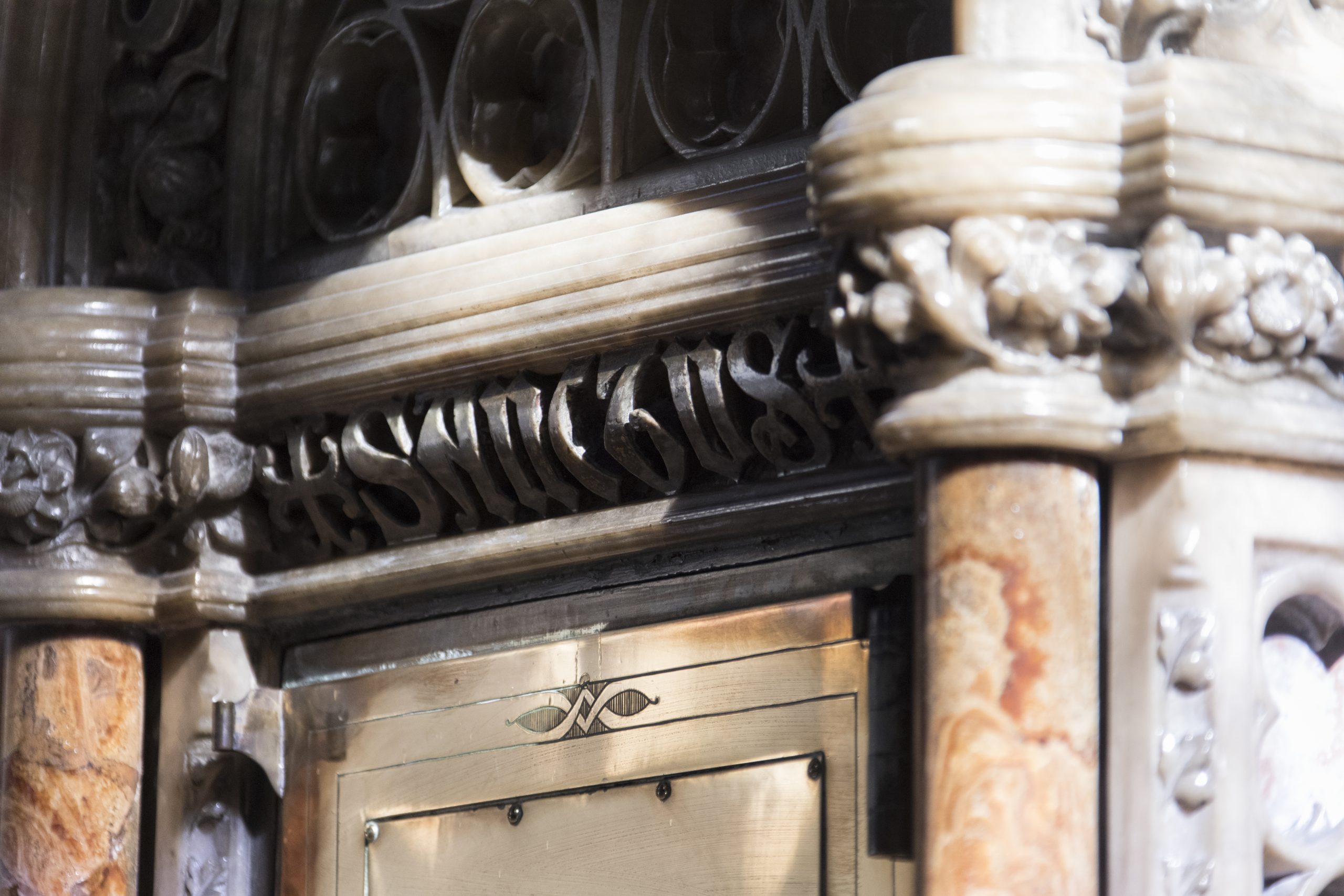 In the late 18th and early 19th centuries the towns of Manchester and Salford were fast developing into the world’s first industrial metropolis.  Mass migration of workers especially from Ireland along with the gradual easing of the Penal Laws which had outlawed the practice of the Catholic faith after the Reformation, saw a massive increase in the number of Catholics.  Between 1777 and 1837 the number of Catholics in Manchester grew from barely 20 to over 60,000.

By the mid-1830s there were just four chapels in Manchester to serve the growing population, and in 1835 the pressing need for more churches was made more acute by the collapse of the roof of St Mary’s, Mulberry Street.  The decision was made to rebuild St Mary’s and construct a large church close to the centre of Manchester to help meet the need of the growing Catholic population.

In 1840 a site at Hunts Bank near Chetham’s School was purchased but it proved unsuitable when the building of a new railway line at what is now Victoria Station was proposed.  The site was sold and a new plot at White Cross Bank (present day Chapel Street) in Salford was acquired.  The new site was undeveloped land but was adjacent to a recently established Catholic school with its own chapel, only recently completed in 1843.

On Whit Thursday, 1844, Bishop James Sharples, Coadjutor Bishop of the Lancashire Vicariate, laid the foundation stone of the new church before approximately 6,000 people.  Four years later on 9th August 1848, the Church of St John the Evangelist was opened.  The architect was Matthew Ellison Hadfield (1812–1885) of Weightman and Hadfield based in Sheffield, and the construction work was undertaken by Benjamin Hollins of Manchester.  Hadfield’s design for St. John’s, the first cruciform Catholic church to be built in England since the Reformation, was closely modelled on a number of noted medieval churches.

In 1850 the Catholic Hierarchy of England & Wales was restored, and the Diocese of Salford was formed and on 25th July 1851, Rev. William Turner was consecrated first Bishop of Salford.  After the formation of the Diocese further works were undertaken at St John’s to further embellish the church in a manner befitting its newly granted status as a cathedral.

These works, which included the installation of the high altar, the great east window, the choir, and extensive wall paintings were completed in 1855 and the formal opening of the Cathedral of St John the Evangelist took place on 27th September that same year; the Archbishop of Westminster, Cardinal Nicholas Wiseman preached at the inaugural Mass.

Thirty years later in October 1881 a violent storm caused serious damage to the Cathedral’s 240-foot (73.2 m) spire. Canon Beesley, then the administrator, succeeded in raising funds for repairs to the spire and generally refurbishing the fabric of the building. He also oversaw the furnishing of the new chapel of the Blessed Sacrament in the ‘south’ transept in 1884, to designs of Peter Paul Pugin, third son of A.W.N. Pugin, the painted decoration was undertaken by Joseph Aloysius Pippet.

By early 1890 the last £1,000 was paid to settle the original debt for the building of the Cathedral, which led to the consecration of the Cathedral in the same year by the second Bishop of Salford, Herbert Vaughan, later to become Cardinal Archbishop of Westminster.

In 1919–20 the turrets on the “west” front were found to be in danger of collapsing into the street below. They were taken down and rebuilt by the Sheffield firm of O’Neill & Son under the direction of Charles M. Hadfield, grandson of the Cathedral’s original architect. In 1923 the War Memorial Chapel in the “north” transept was opened.

By 1934 the Cathedral’s spire was found to have strayed from the perpendicular and the Civic authorities ordered that some sixty feet be removed. Repairs were not completed until 1938. Restoration and repair of damage sustained in the Second World War was carried out in the immediate post-war years including restoration of the extensive mosaic floor of the choir and chancel originally by Minton.

Further restoration and re-ordering were carried out in 1971–72 at a cost of £80,000. This included the erection of a new free-standing altar located under the crossing, following the Second Vatican Council. A further re-ordering of the choir and chancel took place in 1988, including the removal of the original stone High Altar and Reredos, installed in 1853-55 to designs by George Goldie.

A new stained-glass west window was installed in 1994, to commemorate the 150th anniversary of the laying of the Cathedral’s foundation stone. Its title is When I am lifted up, I shall draw all to myself, and it depicts, in somewhat abstract form, the crucified Christ flanked by the Virgin Mary and the Cathedral’s patron, St. John.

Restoration of the external stonework to the spire and ‘west’ (i.e. south) front took place in the spring of 2007.

On Saturday 6 July 2019, Bishop John Arnold unveiled the new north entrance and piazza. The new entrance, which is just one element of a major restoration and repair project at the Cathedral. The west door will replace the North Door as the main entrance to the Cathedral.

The WWI Memorial Chapel is restored thanks to a generous grant from Historic England. In November 2021, Salford Cathedral announced its multi-million pound Restoration Project, aiming to revive the iconic splendour of this church whilst making it the most sustainable cathedral in the country.