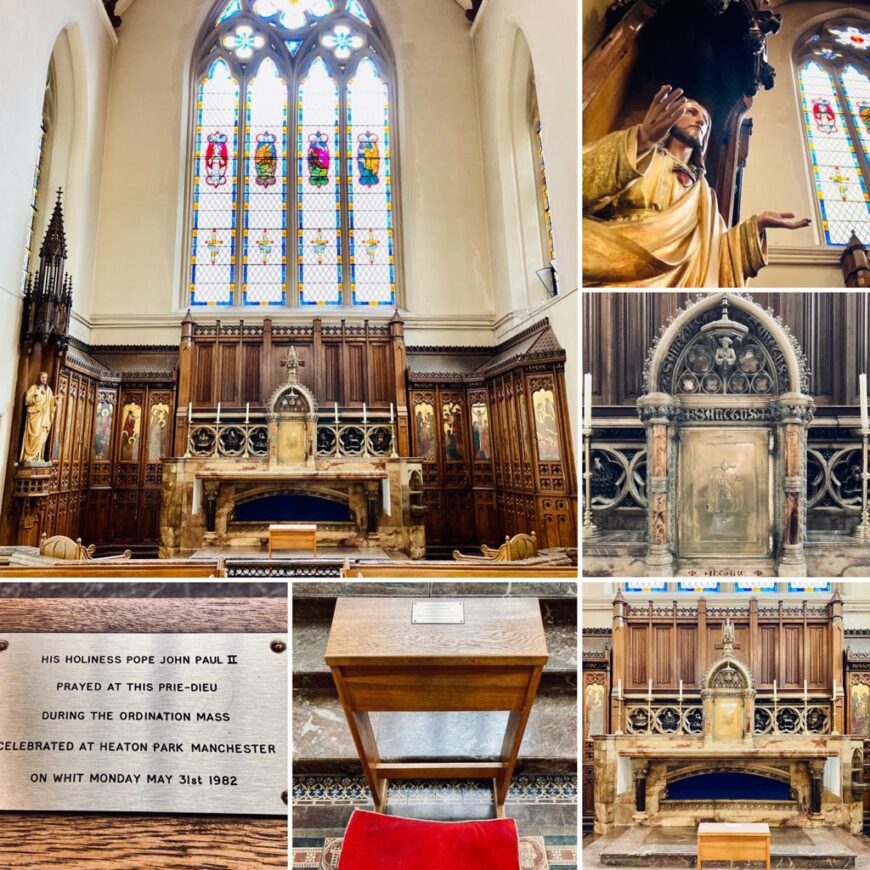 This week we’d like to tell you about one of the most beautiful parts of the Cathedral, the Blessed Sacrament Chapel which remains largely intact since its creation in 1884. The original Blessed Sacrament chapel was located in what is now the First World War Memorial Chapel, in the North Transept. In 1884 to mark the 40th anniversary of the laying of the foundation stone of St John’s this new, more elaborate chapel was created. Designed by Peter Paul Pugin (1851-1904), youngest son of the well renowned Augusts Welby Northmore Pugin (1812-52). The paneled reliquary cupboards either side of the altar house numerous relics of Saints, the greatest being the effigy of St Aurelius, Archbishop of Carthage in the early 5th century that lies beneath the altar. Bishop Herbert Vaughan (later Cardinal) acquired many of these relics on visits to Rome in the late 19th century.

The altar is exquisitely carved decorated with finely carved details. The
reredos is decorated with symbols of the Eucharistic and sacrifice. The
carved detailing is the work of R. L. Boulton & Sons of Cheltenham who
produced some of the finest sculpture of their day. The paneled relic cabinets either side of the altar were decorated by the ecclesiastical artist and designer Joseph Aloysius Pippet (1841-1903) who worked for Hardman of Birmingham. The scenes from left to right depict the Joyful, Sorrowful, and Glorious Mysteries of the Rosary.

In front of the altar is the prie-dieu used by Saint John Paul II during the ordination Mass which took place at Heaton Park on Whit Monday, 31st May 1982.