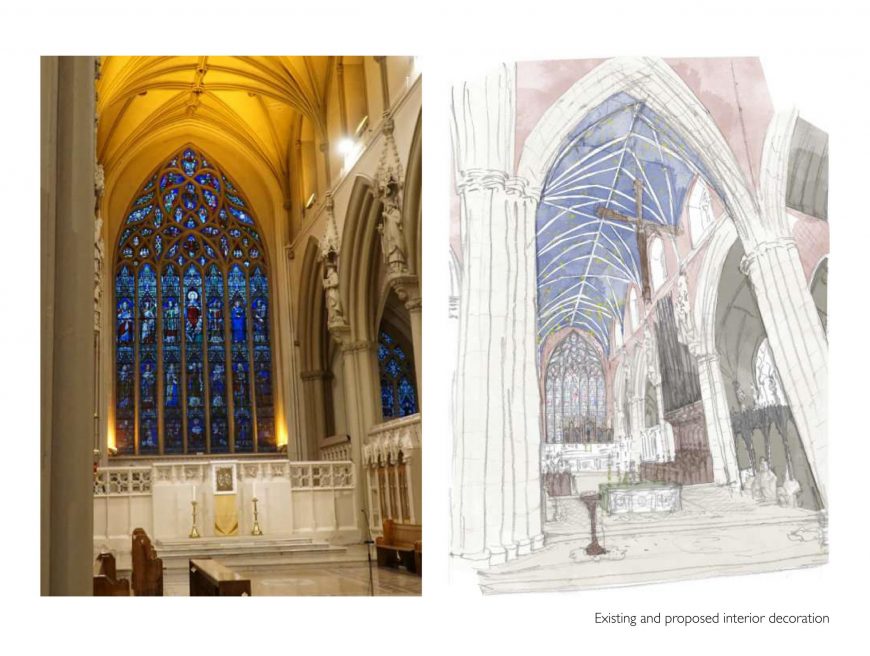 We are delighted to reveal this sneak preview of the interior stage (Phase 2) of our Cathedral Restoration Project. The architects at Purcells working on the project have kindly provided us with a detailed floor plan, showing the proposed re-ordering and changes to the flooring in the cathedral. They have also provided us with some exciting concept art, showing a before/after of the proposed decoration in the chancel.

The architects also gave a detailed explanation of these proposals:

“The proposed internal reordering for the cathedral is being developed sympathetically to respond to the original medieval style of architecture. Successive reorderings in the 1970s and 1980s removed much of the original stone detailing in the chancel and similar details in the transepts and nave. The proposal seeks to emulate some of this original decoration while being considerate of modern construction standards, thermal improvement and access requirements. An image shown here demonstrates the ambition for the flooring scheme which utilises encaustic and geometric tiles manufactured by the same company that supplied tiles for the cathedral in the 19th Century. Separate images show the existing and a proposed interior styling for the chancel which will be decorated and refurbished to a condition as would be sympathetic with the original.”

We invite any feedback you may have about the Cathedral Restoration Project. Feedback forms are available on the desk in the cathedral, and you can also fill in this form or email feedback directly to communications@salfordcathedral.co.uk.